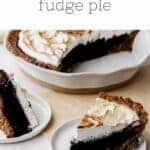 A thick graham cracker crust, decadent fudgy center and a fluffy marshmallow toasted top, this S'mores Fudge Pie is quite the treat. You can fulfill your s'mores fix without the sticky mess with a giant piece of this delicious pie!

We love s'mores in our house so anytime we can get that graham cracker, chocolate, marshmallow combination, we will take it in whatever form it comes in! While eating s'mores as a pie doesn't give quite the same experience as roasting a marshmallow on the fire, it sure is a much cleaner way to enjoy this gooey campfire treat!

How to Make S'mores Fudge Pie

You will want to begin by preheating your oven to 350°.

Put an entire 14-ounce box of graham crackers in your food processor and process until fine crumbs form, then transfer the crumbs to a large bowl. Next, you will add sugar, butter, salt, egg white and the whole egg and stir to combine.

Coat a 9-inch deep dish pie plate with cooking spray. Press the graham cracker mixture into the bottom and sides of the pie plate, pushing firmly. Bake in 350° oven for 5 minutes or until set.

Remove from oven and let it cool completely on a wire rack.

Once the pie crust is completely cool, pour the fudge mixture into the crust and bake for 45-50 minutes or until it is just set. Remove from the oven and let it cool completely on wire rack. Cover the pie with plastic wrap and chill for at least 4 hours before adding the marshmallow topping.

In the bowl of your mixer, add the egg whites, vanilla, cream of tartar, and salt. Beat on high speed until soft peaks form. Meanwhile, combine the sugar and water in a saucepan and bring to a boil over medium-high heat. Cook, without stirring, until a candy thermometer reaches 250°. Now, with your mixer running on a medium-low speed, you will pour the hot sugar mixture in a thin stream over the egg whites. Switch to high speed and beat until stiff peaks form.

Spread the marshmallow topping over the chilled pie. There is plenty of marshmallow, so use as much as you would like and save the extras for another treat! You can use the back of a spoon or a spatula to create little peaks in the marshmallow or spread it smooth.

Place pie on the middle rack under the broiler for 1 ½ to 2 minutes. Watch it closely and rotate the pie dish as needed and remove when it's toasted to your liking! 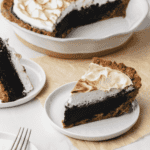 For the Fudge Center:

For the Marshmallow Topping:

For the Fudge Center:

For the Marshmallow Topping:

Try These Chocolatey Recipes Next