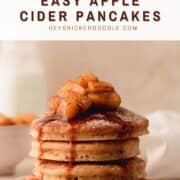 These easy apple cider pancakes are the perfect fall breakfast. They are fluffy, made with apple cider, coated in cinnamon sugar and have a cinnamon apple topping. A delicious, sweet start to your day!

These delicious pancakes taste very similar to an apple cider donut. They have apple cider in the batter and then cinnamon apples on top. The tops of the pancakes are coated with cinnamon sugar before stacking them on plates, which gives them that crunchy and sweet apple cider donut feel...and taste!

These make the most perfect breakfast, but are also fun to make for dinner. Who doesn't love breakfast for dinner, anyway?

Why You Will Love These

Here are notes about some of the ingredients needed to make these fluffy apple cider pancakes. For a full ingredient list see the recipe card below.

Here is how to make these easy apple pancakes. You will need a saucepan, bowls, a whisk, and an electric or stovetop griddle.

STEP 1: In a medium sized saucepan, combine the apple cider and butter. Heat this over medium heat until the butter is melted.

STEP 2: Add the apples, brown sugar, cinnamon and cloves. Stir to coat evenly and then continue to cook over medium heat while you prepare the pancakes, stirring occasionally until tender.

STEP 1: In a small bowl, combine the sugar and cinnamon. Stir this well until it is combined.

STEP 2: Pour the cinnamon sugar mixture onto a plate and set it aside until the pancakes are ready.

STEP 1: In a medium bowl, combine the dry ingredients (flour, sugar, baking powder, baking soda, and salt.) Stir this with a whisk until it is combined.

STEP 2: In a separate bowl, combine the wet ingredients (apple cider, vegetable oil and egg whites.) Stir this with a whisk until it is fully combined.

STEP 3: Add the apple cider mixture to the flour mixture and stir with a whisk just until combined. Set aside to let the batter rest for at least 5 minutes while the griddle heats up.

STEP 5: Pour pancakes by the ¼ cup onto the hot griddle.

STEP 6: Allow pancakes to cook on the griddle until bubbles form and the edges start to look dry. Flip the pancakes and allow them to cook for about an additional minute, or until the centers are cooked through.

STEP 7: Remove pancakes from the griddle and place on a plate. Repeat with remaining batter.

STEP 8: When you are ready to serve the pancakes, brush the tops and edges of the pancakes with melted butter. Immediately dip the buttered side into the cinnamon sugar mixture on the plate, sliding it around to fully coat. Place pancakes on a serving plate and stack as many as desired.

STEP 9: Top pancakes with warm apple mixture, drizzling with any juice from the bottom of the saucepan. Serve immediately.

Can I use apple juice instead of apple cider?

Yes. Sometimes apple cider can be difficult to find. I would use apple juice in its place, if needed. You might choose unsweetened apple juice so your pancakes don't get too sweet.

Can I make the apple topping ahead of time?

Yes. You could make the apple topping ahead of time and just warm it up before serving it with the pancakes.

Do I have to let the pancake batter rest?

Yes. Allowing the batter to rest will help your pancakes to cook up extra fluffy. Also be careful not to over mix the batter because that will help them to be fluffy too!

To refrigerate leftover pancakes, allow them to cool to room temperature and then place them in an airtight zip top bag or container. Refrigerate for up to 3 days. Reheat, wrapped in paper towels, in the microwave until heated through.

Refrigerate the cooled apple topping in an airtight container in the refrigerator for up to 3 days. Heat in the microwave until heated through before serving.

To freeze pancakes, place cooled pancakes in an airtight zip top bag and place in the freezer for up to 3 months. Reheat, wrapped in paper towels, until heated through.

Other Recipes to Try 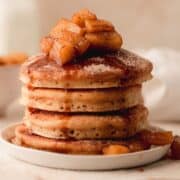 For the Apple Topping:

For the Cinnamon Sugar Coating:

For the Apple Topping:

For the Cinnamon Sugar Topping: