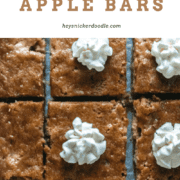 These Sour Cream Apple Slice bars are filled with apples, a hint of cinnamon and have an amazing shortbread crust. Slice these bars warm or at room temperature into oversized squares and serve with whipped cream or ice cream. They are the most perfect fall dessert!

This is a recipe I found in my grandma's recipe box. The recipe card lacked most of the instructions and just had the ingredients and a few details. I had fun rewriting the recipe and adding in all the details we find in recipes on the internet these days.

I think these Sour Cream Apple Slice bars taste just like a cinnamon graham cracker. They have the most amazing crust that pairs perfectly with the soft sour cream and apple topping. While you might think these would come out creamy from the sour cream, they actually aren't creamy at all, it's more like an apple pie filling. Adding a big dollop of whipped cream or a scoop of vanilla ice cream makes this a favorite fall dessert!

To begin you will want to preheat your oven to 350° and spray a 9x13-inch baking pan with cooking spray. I also lined mine with parchment paper so I could pull the bars out and cut them easily. You can do this by making a parchment paper sling. To do this use two pieces of parchment paper. One that will fit In the pan lengthwise with some excess hanging over and one that fits in the pan crosswise with excess hanging over. Spray your pan with cooking spray and press your two pieces of parchment into the bottoms and up the sides of your pan. This is optional as the squares can be cut in the pan just as easily.

In the bowl of your mixer, you will combine the flour, sugar and butter. Mix this at a medium speed until the mixture is crumbly. Then stir in the walnuts.

Add the sour cream, cinnamon, vanilla, baking soda, egg, and salt to the remaining flour mixture in the bowl of your mixer. Mix on low just until it is combined, then stir in the apples.

Bake in the 350°F oven for 35-40 minutes or until a toothpick inserted in center comes out mostly clean. Let the bars cool completely in the pan.

Once they are cool, cut them into 24 squares and top with whipped cream or vanilla ice cream.

If you have some sour cream leftover after making these Sour Cream Apple Slice bars and need to use it up, try one of these recipes: 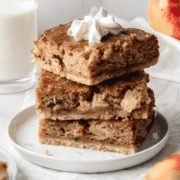