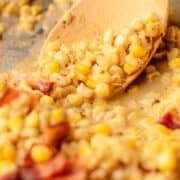 This Creamy Skillet Corn is both savory and sweet and it pairs well with grilled meats for dinner. Let this six ingredient Creamy Skillet Corn with bacon cook on the stove while you prepare the rest of your dinner and you'll be pleased with the creamy, delicious end result!

This Creamy Skillet Corn is best when fresh sweet corn is available, but I've made it other times during the year and it's just as good using frozen corn.

Cooking the corn slowly in the fat from the bacon gives this the most delicious flavor. Topping it with the crispy cooked bacon is a great addition, and rounds out this perfect side dish.

If you are looking for more delicious side dish recipes, try one of these: Cheese and Onion Scones, Honey Sriracha Brussels Sprouts or Cheesy Hasselback Sweet Potatoes.

Why You Will Love This

Here is how to make this delicious recipe.

STEP 1: Stand the corn cob up in a baking dish. Using a sharp knife, start at the top and cut downward as close to the cob as you can get, allowing the corn kernals to fall into the dish. Rotate and continue cutting downward until all kernels have been removed.

STEP 2: Scrape the cob on the side of the dish making sure to rotate and continue scraping around the entire corn cob. Set the corn aside until you are finished cooking the bacon.

STEP 1: In a large ovenproof skillet, cook the bacon until crisp over medium-low heat.

STEP 2: Remove the bacon from the skillet to a paper towel lined plate. Keep the rendered bacon fat in the skillet.

STEP 3: Coarsely chop bacon once it has cooled.

STEP 1: In the skillet with the rendered bacon fat, add the corn, water, salt, and pepper. Stir to combine.

STEP 2: With the stove still set to a medium-low heat, let the corn cook for 40-45 minutes, stirring occasionally.

STEP 3: Add the heavy whipping cream and cook for an additional 5 minutes. Remove the skillet from the heat and sprinkle the bacon on top. Enjoy!

Can I use frozen sweet corn?

Sure. If you are making this out of fresh sweet corn season, frozen sweet corn would work fine. I would substitute 4-5 cups frozen corn. You may not get the same creamy, flavorful experience as you would with the fresh corn, but it will still be delicous!

Would a cast iron skillet work?

Absolutely. That would be a great skillet choice to use for this!

Can I skip the heavy whipping cream?

Absolutely. I like to add it just for a little extra creamy texture and rich flavor, but without is so good too!

Store leftover corn in an airtight container in the refrigerator for up to 5 days. Reheat in the microwave for about 1 minute, or until heated through.

This corn could also be frozen in an airtight container or zip top bag for up to 3 months. Thaw in the refrigerator and reheat on the stove top or in the microwave.

Other Recipes to Try

If you find that you have leftover heavy whipping cream after making this easy recipe, try one of these recipes to use it up: 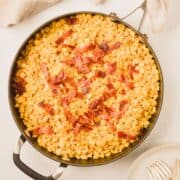 Author: Ashlyn Meredith
This Creamy Skillet Corn is both savory and sweet and it pairs well with grilled meats for dinner. Let this six ingredient Creamy Skillet Corn with bacon cook on the stove while you prepare the rest of your dinner and you'll be pleased with the creamy, delicious end result!
Yield: 8
Prep Time: 15 mins
Cook Time: 45 mins
Total Time: 1 hr
5 from 2 votes
Print Recipe Pin Recipe